Casinos Around the World - Vital Statistics

As the casinos continue to flourish the world over the face of the casino industry is changing. The economic fluctuations, the geographical shift in wealth and the emergence and growth in online casinos, have made altered the gaming landscape. Volatile but yet full of promise, Casino world seems like it still has several cards to play. Based on an evaluation of industry trends and statistics revealed by a new study produced by KPMG, I have alluded to the triggers and indicators of change in this constantly evolving industry to provide a deeper understanding of the international casino arena.

There is a global power shift underway on planet casino, as the balance tips towards the APAC (Asia Pacific) region. Economists and technology experts claim to have seen this coming, having predicted this change back in 2011. However it’s only now that the veil of prophecy has been lifted for casino barons and businesses turning this prediction into a reality.

The figures seen in the area are indicative of the accelerated pace at which the APAC region’s gaming industry has grown since 2010. It’s net worth doubled, from $30 million to $60 million between 2010 and 2014, bringing its value almost neck and neck with the US.

As the monetary value of Asia Pacific’s casino industry increased, so do its market share in the international arena. In 2009, the US held 57% of the gaming industry, which was more than double that of the APAC region. However, this margin has shrunk significantly bringing the US and Asia Pacific almost neck and neck with the US holding a 43% market share and the APAC region holding 41%.

So while the US flag is still flying on the largest piece of the global gambling pie Macau has replaced Las Vegas as the biggest gaming city in the world, according to a recent report by KPMG.  However, while Macau may be the new International gambling capital, Las Vegas still houses the world’s most expensive casino CityCentre, which is valued at $9 billion and which has every online casino game imaginable.

The graphic below provides a snapshot of the changing face of the casino industry worldwide.

When you look at the stats below, Asian casinos are picking up at a rapid pace. In some cases they’re already the biggest in the world.

However, Las Vegas is still the capitol of gambling and USA has the largest gambling market. If you want to learn more about the specifics of gambling in the United States, read through our USA online casinos  guide and prepare yourself to have some Vegas-style fun.

But for how long will this last?

The trends speak for themselves. Click on infographic to enlarge.

Feel free to share it on your blog by copying the code below and pasting it (don't make changes, or it could break) in your article

While CityCenter has retained its pricy position atop the international casino pyramid (it’s value unchanged since 2010), there is an Asian venue vying for that spot. Singapore’s  Marina Bay Sands is currently valued at $8 billion. That’s quite an impressive rise from the $5.7 billion at which it was valued at in 2010. 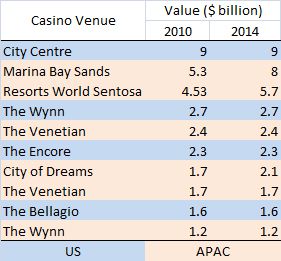 The value of Resorts World Sentosa, also appreciated from $4.3 billion to $5.7 billion between 2010 and 2014; while the value of each Las Vegas Casino remained unchanged.

So, while the US is still ahead of Asia, the question is ‘For How Long?’ The changing  status quo of the land based casinos is evident from the trends illustrated in the figure below.

Note the the stability in casino value in the US vs appreciating value of the casino properties in Asia. 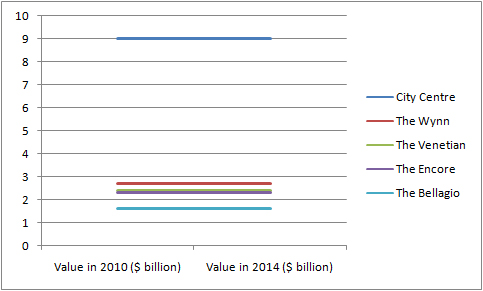 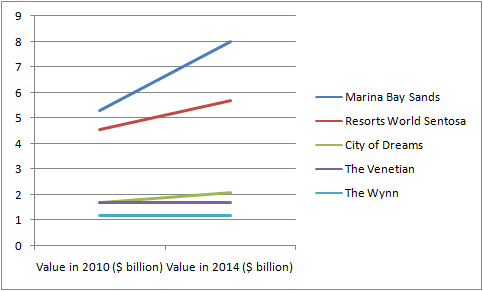 So far we have been focusing largely on casino properties or land based casinos, which may give us a potentially skewed outlook of the gaming industry because of the prolificacy of online gaming that could potentially tip the balance once again. The question is will it?

According to KPMG’s latest trends report, the US is the richest potential market place for online gaming. I say potential because the report refers to it as an unrealised market: the departure of numerous players from this geo specific playing field was a direct upshot of legislation that imposed online gaming restrictions. Despite being presented with a study from a lobbying group that demonstrated the monetary advantage of legalising online poker, law makers did not budge. The results of the study showed that it could potentially inject $90 million into the country’s tax vault – More like an unrealised dollar well than an untapped market.

The Asia Pacific region doesn’t appear to be faring much better with China and South Korea, its largest prospective markets closed to online gaming, according to KPMG. China is an exploding market for internet gambling with gambling woven into its cultural past. Macau has acceded Las Vegas as the world’s most expansive gaming city. Still, online gaming is largely outlawed in the APAC region.

American players typically go for certain online casino games as well. Online slots, online craps, online blackjack are all immensely popular with the American crowd, with online video poker and Caribbean stud slowly climbing up the ranks as well. If you want to learn more about the legal landscape of gambling in the United States of America, you can read through the different legislations that have been formulated by lawmakers which make online casinos USA what they are today.