If you’ve ever witnessed two players going head to head at a game of Backgammon, you’ll know that tension often gets high between players during this game of strategy. In fact, it’s common to see beads of sweat trickling down a person’s forehead when its crunch time and one player is about to be crowned the winner. Ultimately, the one that emerges as the champion is the player that uses Backgammon strategy throughout the course of the game. Below our guide goes through several strategies you can apply when playing Backgammon online. 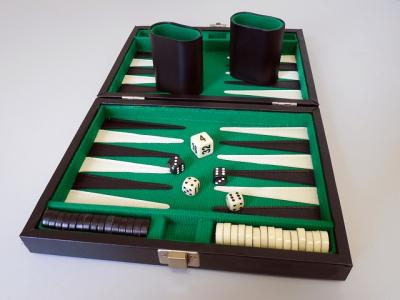 No matter whether you choose to play the game at your local clubhouse or at a cheeky Backgammon online casino, there’s absolutely no doubt about the fact that Backgammon is one of those games out there which certainly involves a heavy dose of strategy. And while you as a newbie might feel a little overwhelmed when playing the game for the first time, we really can’t blame you.

The game has been around for generations and many Backgammon veterans of the game have often played it monthly, weekly or even daily in some cases in order to perfect their Backgammon strategy. So, yes as it can indeed be very disheartening for a new player to go eyeball to eyeball with some of the more seasoned players of the game of strategy out there whose minds are always active when playing a good old game.

Yet, don’t fret if it’s your first time playing for it is indeed possible to beat the Backgammon experts at their game of choice provided that you do employ a spot of strategy of your own. All you need to do is determine which strategies work for you as a player and employ them into your gameplay. No clue where to start? Don’t worry, we’ve got you covered from A to Z.

Why use a strategy for Backgammon?

How to Win at Backgammon

Our Backgammon experts are here to help you dethrone your opponent by securing a sweepingly awesome win that will have you walking out of your club or casino with a smug look on your face and the attitude of a champion. In order to accomplish this, all you’ll need to do is read our Backgammon strategy tips below which are separated into two comprehensive sections, basic and advanced strategy. Yet, before you jump right ahead makes sure that you’re well acquainted with the game’s rules by reading our Backgammon Rules page first.

As we’ve already expressed in numerous Backgammon strategy posts on this site, the main aim in Backgammon is to move your checkers around the board, into your home board, and off the board as quickly as possible in order to win the game. And although this might seem very possible to you

A Running Backgammon strategy is one that’s employed by a participant of the game who is ahead in the race. Provided that you’re new to this strategy, you’ll be happy to know that this one is the simplest to use. This particular strategy is one of the most popular ones that are used by Backgammon players around the globe. In order to abide by this widely used strategy, you’ll need to move your checkers to your home board as fast as possible. In effect, this will serve to minimize the chances your opponent will have to knock you off the grid.

Blitzing your competitor essentially comprises of attacking your direct opponent by landing on his/her checkers which appear to be vulnerable. Rather than aiming to progress forward to reach your home grid, you’ll need to aim for your competitor's ever-so-lonely checkers that are left on the board. Once you send them to the bar, you’ll need to move your checkers as quickly as possible as your opponent tries to catch up with you.

Tip: Keep in mind that you mustn’t play too aggressively when using this particular Backgammon strategy provided that your competitor’s checkers are too close to their respective home grid. Why? Well, the closer your opponent’s checkers are to the home grid, the more you’ll delay him/her from being able to get all the checkers of the board.

The Holding Backgammon strategy is often used by players who feel that they are lagging behind in the race to their home grid. The chief idea behind the Holding strategy in Backgammon involves holding a checker as an anchor point in your adversary’s home grid. Typically, an anchor is held in a high place in your opponent’s part of the board. Provided that you decide to use this strategy, you should always try to hold an anchor in the bar joints or point 20.

Another point worth noting is the importance of recognizing the most suitable times to offer the double cube. Additionally, it is also crucial to accept and reject a double when you’re attempting to either take part or defend the holding game strategy.

Tip: Take your competitor’s checker distribution into account. Provided that your adversary has managed to establish a significant amount of landing points in his/her outer board your opportunity to hit will decline tremendously.

A strategy that’s frequently employed by someone who is significantly behind in the race when playing Backgammon is called a Back Game Backgammon strategy. The Back Game is achieved by controlling 2 or more points found on your competitor’s inner table. Essentially, the main aim when using this type of strategy is to hit what’s referred to in the game as a blot that’s a single checker that’s sitting on its own on a point where it’s very vulnerable of being hit.

Before employing this strategy, it is wise to note that this is one of the most difficult strategies to employ due to the fact that it is generally influenced by the roll of a dice. Provided that you are unlucky once you’ve rolled your dice, you won’t be able to use this strategy to your advantage.

When you have 6 blocked points that are one after the other with every point containing 2 or more checkers, this is called a prime. Essentially, your adversary will not be able to pass the checkers which will remain behind it at all.

Very often this it’s fairly difficult to sustain this for an extended period of time as 12 of your checkers will need to be locked in as to provide a blockade. Yet, to keep it in place for as long as possible will ultimately give your competitor minimal options. Often enough, this will result in moving checkers which are generally more advanced and will ultimately cause them to collectively heap up in the middle.

In addition to this, priming makes it difficult for your opponent to move back onto the board when you manage to knock off an opposing checker. Typically, your opponent will have to roll many times prior to being able to move any other checkers about. 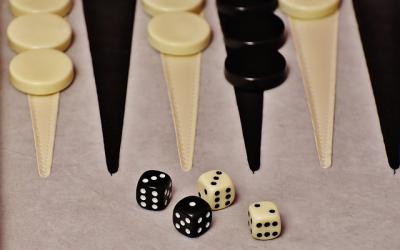 Double Cubing is perhaps one of the most Advanced Backgammon strategies out there that most people both seasoned and new, are afraid to use. However, it is also one of the strategies that can bring a new dynamic to the game. Provided that you’ve never used the doubling cube before, you should definitely try to learn all about it in order to use it while playing Backgammon for real money.

The Backgammon doubling cube’s role in the game is to keep track of the stakes of the game, provided that two players are playing Backgammon for real money. Despite the fact that it looks like a normal die, you’ll notice that it is a bit different in 2 ways. Essentially, it’s two main differences are that it’s a bit larger and that the die is numbered with 2, 4, 8, 16 and 32 that are printed on each of its faces.

Backgammon online is a game of skill, strategy and a sprinkling of luck. Fundamentally, you must use strategy in order to succeed in winning the game. And although you can always apply one or many strategies that we’ve talked about on this page, something else that might indeed help is studying positions and plays of course. Hence, it’s beneficial to have a look at diagrams, videos and read articles as much as you can and then practice using any of the Backgammon trainer programs and apps that are available.

Will using a backgammon basic strategy influence the outcome of your game?

Unlike other games that are found at online casinos, such as Roulette online, Craps online and more, Backgammon is a game of strategy. Hence, the use of a basic strategy will aid you tremendously when playing the game.

What is the best backgammon strategy you can employ while playing the game?

The best backgammon strategy you can use throughout the course of your game is essentially determined by where your checkers are on the board as well as where your opponent's checkers are. So essentially, the best thing you can do before playing a Backgammon online game for real money is to study a few patterns and watch other seasoned players tackle each other head to head. This will enable you to decipher which is the best move to make in the future.

Which is the best backgammon strategy book?

Are there any good Backgammon trainer apps to use online?

Yes, nowadays you’ll be able to train in Backgammon for free by using one of the software trainer apps available on desktop and mobile. Among the ones available are Gnu Backgammon and Extreme Gammon.

Which Backgammon android apps on android do you recommend?

Which Backgammon Apple apps on Apple do you recommend?

Winning at Backgammon is Purely a Matter of Strategy, So Use It