How to Play Caribbean Stud Poker

Caribbean Stud Poker is a relatively new game. Nobody knows exactly who invented the game, but it is documented as having been around since the 80s. Today, it’s an immensely popular game on cruise ships and in casinos around the world.  It can be seen as a mix between both Blackjack and the popular Poker game which is very well known. How to play Caribbean stud poker is explained in full below.

What Should You Know About How to Play Caribbean Stud Poker?

The Objective of Caribbean Stud

The hand ranking in Caribbean Stud is very similar to a regular poker hand, you have five cards to a hand, and the ranking of the cards is the same as well. It also has a few similarities to Blackjack which is why this game is considered to be the child of Poker and Blackjack. Caribbean Stud Poker is played with a regular 52-card deck of cards, and the table looks very similar to the table used in Blackjack, and in the casino the table can take up to seven players at a time, all playing against the dealer.

Your goal in Caribbean Stud is to get a stronger poker hand than the dealer. It’s as easy as that. A little simplified: You and the dealer are dealt five cards each, the two hands are compared and the stronger wins. As you can see below, the hand ranking order is exactly the same as Poker if you are already familiar with playing poker.

How to Play Caribbean Stud Poker - The Hand Ranking

As you can see from the list below, it is the same as in regular five-card draw: 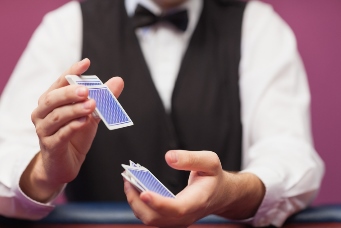 The player starts the game by placing the ante – a mandatory bet to play a hand – and also the optional side bet for the progressive jackpot. Generally speaking, if you think you have a strong hand you place a bet, and if you don’t you leave the game.

After the ante, the player is dealt five cards face down, and the dealer gives himself five cards, four face-down and one face-up. The player may look at his cards but is then not allowed to divulge any information about the cards to the other players around the table.

At this point the player has two options:

• To fold and lose the ante (the original bet)
• Make a bet, exactly twice the ante, and carry on with the hand

If the player decides to fold he forfeit his cards, ante bet, and any side bets that were made for the hand. If the player feels that they have a good hand they must place a raising bet. When you are playing optimally, the house edge is at a very low 5%.

How to Play Caribbean Stud Poker - Determining Who Wins

After this, the dealer turns over his cards so that all five cards are revealed to the players. At this point, the dealer must have at least an ace and a king in order for the game to continue. In accordance with the official Caribbean Stud rules, the lowest qualifying dealer hand is: A-K-2-3-4

If the dealer doesn't have a qualifying hand then the player wins money on their ante bet, and their raise is pushed. ("Pushed" is a term frequently used in online gambling. It simply means a draw and that the bet is returned to the player. ) If the dealer's hand qualifies and beats the player's hand, then the dealer wins and the player will lose both his ante bet and raise.

If the dealer has a qualifying hand but it doesn't beat the player's hand, then the dealer pays the player even money on the ante bet. The raise is then paid according to the paytable below, the stronger the hand the bigger the payout.

These payouts might differ from casino to casino, so make sure that you study the payouts before you start playing. Online, the games often have more player-friendly odds with up to 999 to 1 on royal-straight flush (Microgaming casinos). To determine winnings from progressive side bets, the player will need to refer to a side bet pay table.

How to Play Caribbean Stud Poker - Winning the Progressive Jackpot 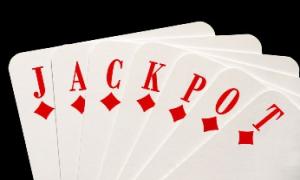 Before a hand starts, players may post an optional side bet of $1. This goes into a collective prize pool which is awarded to players getting a flush or better.
To get the entire progressive jackpot, however, the player must get a royal straight flush.

These are the standard side-bet payouts in online Caribbean stud, although they might differ in different casinos.

Similarities between Poker and Caribbean Poker

Caribbean poker is considered by many to be an adaptation of poker. In order to understand how it was adapted it’s useful to look at the similarities and differences between the two:

• The hand ranking is completely identical
• The moment the player has to make a decision after first receiving the cards from the dealer is the same in both games.

Differences between Poker and Caribbean Poker

The main differences between the two games are found in the development of the game:

• In Caribbean Stud Poker the players play against the dealer, while in a regular Poker game the players play against each other.
• In a poker game betting continues after the first decision has been made after the dealing of the cards, whilst in a Caribbean Stud the only moment a player can influence the game is the moment they see their five cards for the first time and decide if they want to remain in the game or leave the game.

Can I play Caribbean Stud Poker on mobile?

Yes, you can! Read through our articles on mobile casinos and you can start playing Caribbean Stud at the very best online casinos on mobile.

Where can I play Caribbean Stud online?

All you need to do is browse through the online casinos in our toplist which have been carefully selected and offer the very best Caribbean Stud games found online. You can read the casino reviews if you want to learn more about the individual online casinos.

How to play Caribbean Stud poker for free?

You can play Caribbean Stud Poker free online right here at CasinoToplists. Visit our Caribbean Stud free game and you can practice to your heart's content until you feel ready to start playing for money.

What is the main difference between Caribbean stud poker and regular poker?

All you have to remember is that in Caribbean Stud you play only against the dealer, not the other players, and you only have to make a decision once – when you see the five cards that the dealer gives you.

As you understand, the rules of Caribbean Stud are pretty straightforward and easy to learn. If you sign up with an online casino you’ll be able to play right away. But we haven’t said anything about how to play well – when to bet and when to fold and whether or not you should play for the progressive jackpot. So before you play for real money, make sure you study Caribbean Stud poker strategy. In doing so, you will avoid costly mistakes at the Caribbean Stud table.