Pairing a thrill similar to playing the lottery with the satisfaction of instantaneous results, Keno is an extremely exciting and widely available casino game that will keep you entertained for hours. The game’s fascinating origins date back to Ancient China, but its irresistible appeal as a fast-paced luck game endures to this day. Familiarizing yourself with Keno Strategy and Keno’s rules and different betting structures will help make your Keno experience all the more enjoyable! 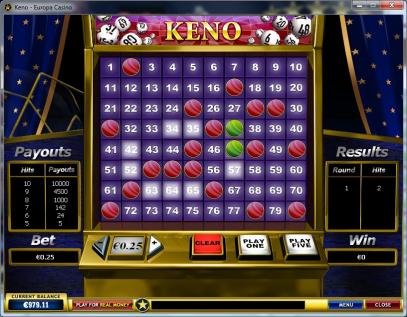 Learning how to play Keno is super simple! The official rules state that the game should be played on a field of 80 numbers. When playing online Keno, you simply need to select those numbers (also called "spots") on which you want to bet, and then wait for the draw. Players can bet on as few as 1 spots or as many as 20 spots.

When you play Keno online you can usually choose to pick the numbers for yourself, or else have them chosen at random by the computer. The odds remain the same regardless. Twenty numbers are typically drawn, and each one that is marked off counts as a ‘catch’. Payouts depend on factors such as;

During an online Keno game, the draw would be done electronically. In a live Keno game, the draw is often done the old fashioned way with numbered ping-pong balls being sucked into a tube one at a time. One of the biggest appeals of Keno comes from that you can bet small amounts (1 spot often equates to 1 dollar, so choosing 7 spots would cost 7 dollars etc). However this also means that payouts also tend to be small. Keno is perhaps best described as a game for those who don’t intend on gambling big and are more interested in the thrill of winning than the prospect of hitting some major jackpot. When playing at Keno lounges or regular casinos, Keno is often enjoyed as a highly social game similar to bingo. Online, Keno functions as a fast-paced and exhilarating game of chance that doesn't require players to commit much time or money (though players should definitely familiarise themselves with Keno Strategy) and later try their hand at the free version.

Sounds easy enough so far, right? Keno is, in its essence, a simple game - however there are ways to spice things up with the type of bets you make. Below you’ll find information on more complex types of Keno bets you can place when enjoying the ancient Chinese game.

What are the Rules of Keno? 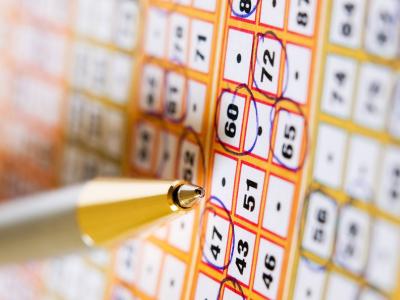 To advance your understanding of the game and learn how to play Keno to its fullest, you’ll need to understand the most common betting structures. These are the standard Keno bets that you'll find at any online casino.
Straight Tickets: When you play a straight ticket you select the numbers you want on the Keno card and wait for the draw. Normally you might bet on 1 to 15 numbers but some casinos allow you to bet on as many as 40 spots on a straight ticket.
Combination Tickets: When you play a combination ticket you combine groups of straight bets on one ticket in different ways. Each possible combination will cost you one unit bet.

Split Tickets: When you play a split ticket you play two or more games on the same Keno Card. You choose two groups of numbers and divide them with circles or a line. If you bet $2 per group your total bet will be $4.

Way Tickets: When you play a way ticket you bet on several groups of numbers on the same Keno Card. This is the most complex bet in Keno. To begin with you have to decide how many combinations of numbers from your chosen groups you want to bet on. After that you must compute the bets you've made according to fractions you place to the right of the betting field. To find out the cost of your bet you add the numerators.
King Tickets: King Tickets is a variation on way tickets. The difference is that you select one or more numbers as "King numbers". The "King Numbers" are circled by themselves, while the groups are still circled as groups.

Some online casinos might offer Keno bonuses from time to time - a special number that might cost you extra to bet on, but which could quadruple your winnings or award you other interesting prizes if drawn. Check with your online casino of choice to see whether any special keno bonuses are being offered. Keep an eye on any progressive Keno jackpots too!

Keno is a classic casino game similar in style to the lottery. It's a fast, low-stake and straight-forward game that has been enjoyed for centuries.

What are the game rules of Keno?

How can I play Keno?

You can play Keno at a land-based or online casino, or at a Keno Lounge. We at CasinoToplists always suggest that before playing with the big boys, you practice on our Free Keno page.

How do I win at Keno?

Is there strategy involved in Keno?

Limiting yourself to a budget and taking advantage of special Keno casino bonuses might maximize your winnings and help you keep your winnings, but there is no surefire way of improving your odds in Keno. You can keep in mind some of these other Keno strategy tips to enhance your gameplay experience.

It is not known whether any one particular individual invented Keno. More likely, the game developed over time until eventually evolving into what we today recognize as modern Keno. An early form of Keno can be dated back 3,000 years to the Chinese Dynasty of Han. Originally, Keno was played with Chinese symbols. Rather than betting on numbers, players would pick Chinese characters like "cloud" or "plum". When the game was brought to American shores, the characters were switched for numbers to make the game more accessible for Americans. You'll often see Keno cards divided into two sections. This is believed to go back to the Chinese idea of yin and yang.

Where can I play Keno online?

Above, you'll find a list of online casino sites offering Keno games. Anyone of these online casinos will let you signup and start playing Keno immediately. If you want to practice your Keno skills or just play for free - head over to our list of casinos offering free Keno instead. Play from home, on your phone, or really anywhere at all!

Is it possible to win big with Keno?

Since one tends to place only small bets on each game of Keno, winnings are also typically marginal. Keno is not the best game for those looking to bet big and win big. Instead, Keno is a game perfect for those who want to play multiple games in a short span of time for small amounts of money.