Although Pontoon is not as well-known as its classic cousin, Blackjack, it’s one of the most played variants in both Britain and Australia. However, the two games do bear some differences you should be aware of. In our Pontoon card game Guide, we reveal what the differences are along with how to play it and the best online casinos to play at!

What is Pontoon (card game)?

As a card game, Pontoon is exciting and can be very lucrative if played correctly. The much-loved table game is a variant of Blackjack, which is mostly played in Australia and Great Britain, has slightly different rules to the original. In fact, we can say that the casino game’s rules are predominantly similar to Spanish 21 with some notable contrasts. However, the overall aim of the game in the Pontoon card game is fundamentally the same as Blackjack – to obtain a ‘Pontoon’ or a hand that’s close to 21 without going bust. In order not to go bust, you must not exceed a total score of 21. 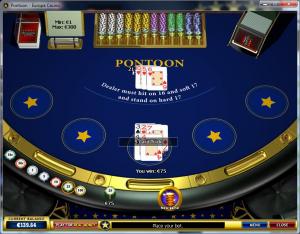 Pontoon at land-based casinos is typically played between 5-8 people. At brick and mortar casinos, each player takes his/her turn being the banker. Typically, the banker is the player giving out the cards to the other players enjoying a game of Pontoon. Each player is given two cards face up.

Pontoon online is the virtual variant of Blackjack’s British cousin. It’s quite common to find the Pontoon card game at many RTG Casinos, NetEnt Casinos, Microgaming Casinos and Playtech Casinos. Although the virtual games found at these casinos generally differ from Pontoon games that are played at brick-and-mortar casinos, they’re usually more or less the same. The main difference between the two is that you always play against the dealer rather than other players and that the role of the ‘banker’ doesn’t exist.

Why Should You Play Pontoon Online?

Pontoon uses eight decks and shares many blackjack rules, but also adds some significant changes into the mix, most notably paying the player at 2:1 for any five card hands they make (including five card hands after splitting). Below we've managed to compile the difference in rules along with exactly how to play pontoon online.

A look at the Difference Between Blackjack's Rules & the Rules of Pontoon:

How to Play Pontoon Online

1) Decide How Much You Should Bet

The first thing you need to do when playing the Pontoon card game online is to choose how much you should bet. Typically, you’ll be able to choose an ante of $/£/ € 1 to 40. Once you’ve decided on how much to place as your ante, you’ll then just need to click on the chip and press ‘deal’.

Now that you’re done, just go on and press the ‘Deal’ button. Once you have, the virtual dealer will give out the cards.

3) Check Your Score & Decide Which Move to Make

When you’ve finally got your cards, you’ll then need to check your overall score. Provided that you’ve managed to get a ‘Pontoon’, you’ll automatically win the game. However, if your score is under 21, you’ll need to decide what your next move is. Amongst the different moves you can choose are ‘Twist’, ‘Stick’, ‘Buy’ and ‘Split’.

The Moves in Pontoon

Just like when playing Blackjack online, you’ll have to choose which moves to make at a certain point in the game. And although the moves you can make are predominantly the same, they have very different names in the Pontoon card game. So, we urge you to learn what they are before you actually start playing the game online or at a land-based casino.

Twist: In Pontoon instead of saying ‘hit’, you say ‘Twist’ instead. Basically, you’d use this move to when you need another card. Once you’ve pressed this button, your dealer will give you another card.

Stick: The word for ‘Stand’ in Pontoon is ‘Stick’. Essentially, you’d choose to stick when you no longer wish to receive any more cards from the dealer.

Buy: Provided that you’d like to double down in Pontoon, you’d select ‘Buy’. When choosing this option, you’ll have to also place a bet which is equal to the same amount you had initially bet on your base hand. So, essentially you’ll be doubling your bet too.

Before choosing this move, you should be aware of the fact that you’ll only be able to buy a cad once per round. The only time you’ll be allowed to buy another card is when you split a pair of cards.

Split: The split move is only made available to a player when he/she has managed to obtain a pair of cards. Provided that this move is selected, you’ll end up with two hands and a new bet must be placed on the new hand. The amount bet on the new hand needn’t be of the same value as he bet placed on the first hand.

Surrender: Although the option to Surrender is not always made available to players, you’ll sometimes come across it. Hence, it’s certainly worth a mention just in case you do.

4) Wait for the outcome

Provided that the player comes out with better cards than the house, they win their hand. Yet, if you lose to the dealer, you must forfeit the chips you’ve bet with.

Once the round is over, you’ll be able to re-bet your money should you wish to. Re-betting your money essentially means that you’ll be betting the same amount you did the time before. However, if you wish to change the amount you’d like to bet, you should not Rebet. 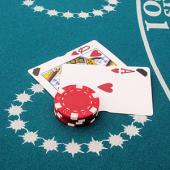 Once you’ve memorized Pontoon’s rules well, you should get started on learning how to employ optimal Pontoon strategy! Learning it will enable you to decrease the house edge to about 0.35% and may lead to achieving success and winning the amount in the kitty eventually. The Pontoon card game strategy is a good deal different from basic Blackjack strategy due to all the different rules and variations. So we really recommend that you have a look at our Pontoon card game strategy chart below which pretty much sums up all you need to know in visual format! 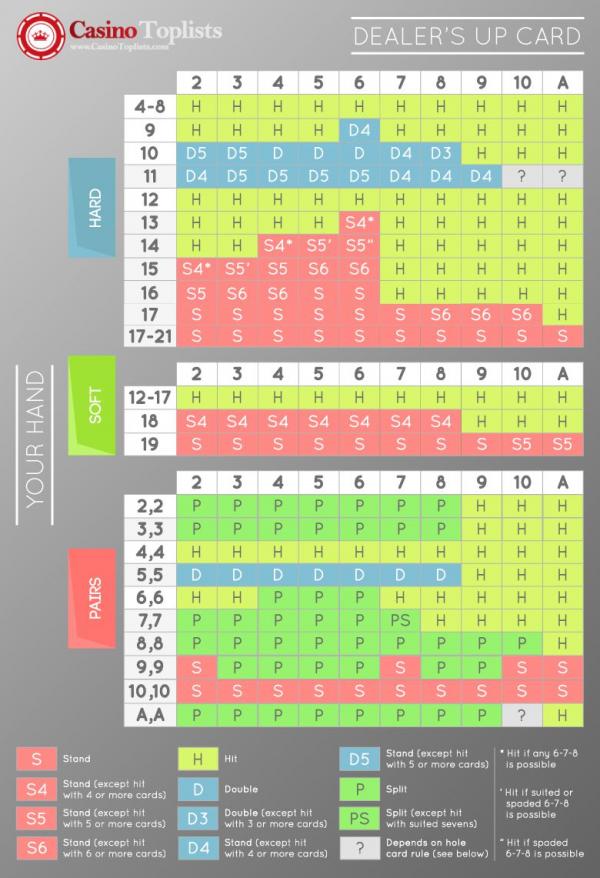 What are the Best Hands in a Pontoon Game?

A ‘pontoon’ is exactly the same as a ‘blackjack’ i.e. a hand which is composed of a 10 and a King, Queen, Jack or a 10. Obtaining a pontoon will generally result in an automatic win on the player’s part. However, if the dealer also manages to acquire this type of hand, the dealer will win instead.

The next best hand is known as a Five Hand Trick. As the name implies, this is a hand which consists of five cards. The total score of a five hand trick is either 21 or less.

A hand of 3 or 4 cards with a total score of 21 beats all other hands except for a Pontoon or a Five Card Trick.

A hand with a score of 20 or under and fewer than five cards rank according to how close to the score of 21 they are.

Here are a few examples which illustrate what we mean:

Which is the worst hand in Pontoon? A Bust Hand

The worst hand you can possibly have whilst playing the Pontoon card game is a bust hand. A bust hand is a hand with a total score that adds up to anything that's over 21.

Similarly to Blackjack, the amount you’ll be paid out fundamentally depends on the hand you get. Below are the payouts you’ll generally get when obtaining certain hands:

Sign up at a Pontoon Casino, Play & Win Big!

Overall, the Pontoon card game is perhaps one of the most beloved table games in both Britain and Australia alike. Although the terms used in this game are different to Blackjack and the rules also differ quite a bit, they are fundamentally quite easy to learn. Another factor that makes this game very appealing is the fact that the house edge is also quite good too! Want to give it a try? Just pick an online casino from our list!